The American Cemetery near Omaha Beach honors over 9000 fallen soldiers

Quaint row houses line the canals of this influential city

The main city square is lined with 16th-century Flemish Guildhouses

This legendary waterway is lined with castle ruins, vineyards, and romantic villages

*Pricing is Land-Only per person & based on Double Occupancy. 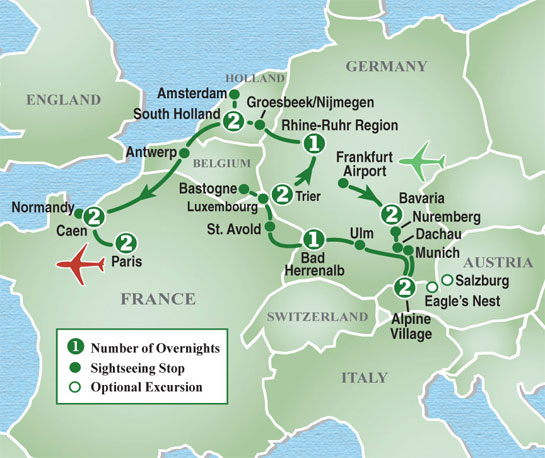 The Trip Documents will provide guidance for airport check-in and for your arrival in Europe. Relax on your transatlantic flight with the assurance that Image Tours has taken care of all the details.

Upon arrival, clear passport control and collect your luggage. Refer to the “Arrival Instructions” in the Trip Documents for directions on where and when to meet your tour manager. Settle into your comfortable motor coach for a ride into the heart of the Franconian Wine Region on the way to Nuremberg. During the “Welcome to Europe” dinner at the hotel, get acquainted with your fellow tour members. (Dinner)

Today is devoted to the history of Nuremberg. Hitler staged his propaganda rallies here and, after his fall, it was chosen as the location for the War Trials. You will have an opportunity to see the Nazi Party Rally Grounds, Congress Hall, and Palace of Justice where the War Trials were held. Admission to the Documentation Center's temporary exhibit (2021-2023 renovations) considers the causes and consequences of Nazi Germany. You will also discover the Old Town's charming half-timbered buildings and medieval fortifications. Return to your hotel for dinner. (Breakfast, Dinner)

Leave Nuremberg and travel to Dachau Concentration Camp. At the entrance, you are already prompted to reflect on the incomprehensible as your tour manager translates the German phrase on the iron gate: ARBEIT MACHT FREI (Work Makes One Free). Study the exhibit recounting the “path of the prisoners” and see the site of the former barracks. Your tour continues to Munich, the elegant capital of Bavaria. Pass points of interest, such as the Hitler Building, on your way to the Marienplatz, a pedestrian-only zone where historic buildings are cleverly interspersed with modern store fronts. The centerpiece of the square is the Rathaus (Town Hall) with its captivating Glockenspiel (clock tower). Following a leisurely visit, depart Munich and cross the border from Germany into Austria, where you will spend the next two nights in an Alpine village. (Breakfast, Dinner)

Enjoy a relaxing day in the surroundings of your hotel. The area offers many options for sightseeing and leisure activities within walking distance or by public transportation. Another choice is to join the full day optional Salzburg & Eagle’s Nest with Dinner excursion. This excursion includes a guided visit to the Kehlsteinhaus, Hitler’s mountain hideaway, followed by an afternoon in Salzburg, Mozart's birthplace and the filming site for the “Sound of Music." This evening, return to your Alpine Village hotel. (Breakfast)

After a leisurely breakfast, travel to Ulm to view the imposing Ulm Minster with the tallest church steeple in the world. This afternoon, make a stop at the grave of Erwin Rommel, the general who was forced to commit suicide when Hitler suspected him of treason. End the day with a buffet dinner at your hotel in Bad Herrenalb, on the northern edge of Germany’s Black Forest. (Breakfast, Dinner)

Follow a scenic route through the Alsace Region and the Vosges Mountains to the town of Saverne, the site of heavy fighting in the fall of 1944. Stop at Lorraine’s American Cemetery in St. Avold, the largest American World War II cemetery in Europe. The afternoon is reserved for a tour of Fort Hackenberg, part of the Maginot Line. This system of obstacles was constructed between the world wars as a defense against any future German invasions. Your hotel for the next two nights will be in Igel, a quiet village near the three-country border of France, Luxembourg and Germany. (Breakfast, Dinner)

The morning stop is at the American Cemetery in Luxembourg where General George Patton is buried. Continue into the Belgian Ardennes Region and arrive in Bastogne to view the star-shaped Mardasson Monument, a tribute to the soldiers who died in the Battle of Ardennes. Also see the fox holes used by Easy Company, whose stories inspired the TV mini-series “Band of Brothers.” Your travels this afternoon take you to the Luxembourg National Museum of Military History in Diekirch. Trier, the oldest city in Germany, provides an intriguing backdrop for your independent dinner before returning to your hotel in Igel. (Breakfast)

Motor to one of the most beautiful stretches of the Rhine River where you will board a river steamer for a boat ride past endearing villages, medieval fortresses, and hillside vineyards known for producing the distinctive Rhine wines. Continue through the Rhine River Valley to Remagen to view the remains of the Ludendorff Bridge, the last standing bridge on the Rhine, which was captured by U.S. soldiers on March 7, 1945. By mid-afternoon, continue to your Rhine-Ruhr region hotel. Dinner will be served at the hotel this evening. (Breakfast, Dinner)

Crossing the border, focus on sites significant to WWII liberation efforts in The Netherlands (Holland), including locations associated with Operation Market Garden. The bridge over the Waal River at Nijmegen was a strategic asset reclaimed after the historical crossing of American paratroopers. Travel Hell’s Highway and stop at the memorial in Overasselt, commemorating the site of the largest airborne operation of all time. The day will also feature a visit to one of the local museums documenting the World War II resistance in The Netherlands. Continue to your South Holland hotel for check-in and an included dinner. (Breakfast, Dinner)

Travel through Holland's countryside, characterized by canals, dikes and windmills, as you make your way to the dynamic city of Amsterdam. Your visit begins with a ride aboard a glass-topped boat through Amsterdam’s harbor and canals where you will see numerous bridges, boathouses and bicycles while gliding past eye-catching 17th century gabled houses. During an independent lunch, you may wish to try Dutch pancakes or other local specialties. This afternoon, walk to the main square, an ideal focal point for your individual exploration. Return to your South Holland hotel for an included dinner. (Breakfast, Dinner)

Today is a full day of travel from Holland to Caen with a stop in the port city of Antwerp, Belgium, characterized by its convivial atmosphere. Explore the central market square with its irresistible chocolate shops and cozy outdoor cafés where you can order a Belgian Waffle. Continue the drive into France for an early evening check-in at your Caen hotel. Dinner will be served upon your arrival. (Breakfast, Dinner)

The entire day is spent touring the famous Normandy Landing Beaches. From Caen, drive to the coast and stop at Pointe du Hoc to view the German fortifications. You’ll also travel to Utah Beach and Sainte-Mère-Église, the site where paratroopers landed during World War II as portrayed in the movie “The Longest Day.” Visit Sainte-Mère-Église Airborne Museum before continuing to Omaha Beach and the American Cemetery. Proceed to the artillery battery at Longues-sur-Mer. At today’s final stop in the village of Arromanches, you can view remnants of the artificial harbor and reflect on the sights of the day over an independent dinner. (Breakfast)

Spend the morning touring the Caen Peace Memorial and Museum. This beautiful place honors the liberators, victims, and all those who continue to fight for peace. As you depart Caen, pause at the Pegasus Bridge for a guided visit to understand how its capture by the British 6th Airborne division was instrumental in deterring a German counter-attack. By late afternoon, arrive in Paris and spend the evening exploring the Montmartre District, where Paris looks as it does in old paintings and artists still display their works. Here, you may also visit the impressive Sacré-Cœur Basilica and take in the expansive views over Paris. Montmartre boasts many restaurants and cozy sidewalk cafés perfect for an independent dinner in the French capital. (Breakfast)

The day is devoted to Paris, La Ville Lumìere (City of Light). On your way into the center, see the Arc de Triomphe which has been the staging area for victory parades throughout history including those following WWII. Your tour manager will also direct you to the location of the principal sights, such as the Notre Dame Cathedral, Eiffel Tower, and Louvre Museum (open every day except Tuesday). Before beginning your free time, we suggest joining the optional Seine River Cruise excursion. This evening, join your travel companions for a festive "Farewell Dinner" with roving musicians and tantalizing French dishes at an authentic Parisian bistro. (Breakfast, Dinner)

Transfer to the Paris Airport for the return flight home. (Breakfast)

The Availability, Departure Dates, and Rates are for illustration and planning purposes only. Since final pricing and single availability can only be confirmed with a travel agent, steps 4 & 5 of this on-line booking module is reserved for your travel agent only. (Please Call) indicates that we still have some tour availability; however, you should have your travel agent call our office to confirm air availability. 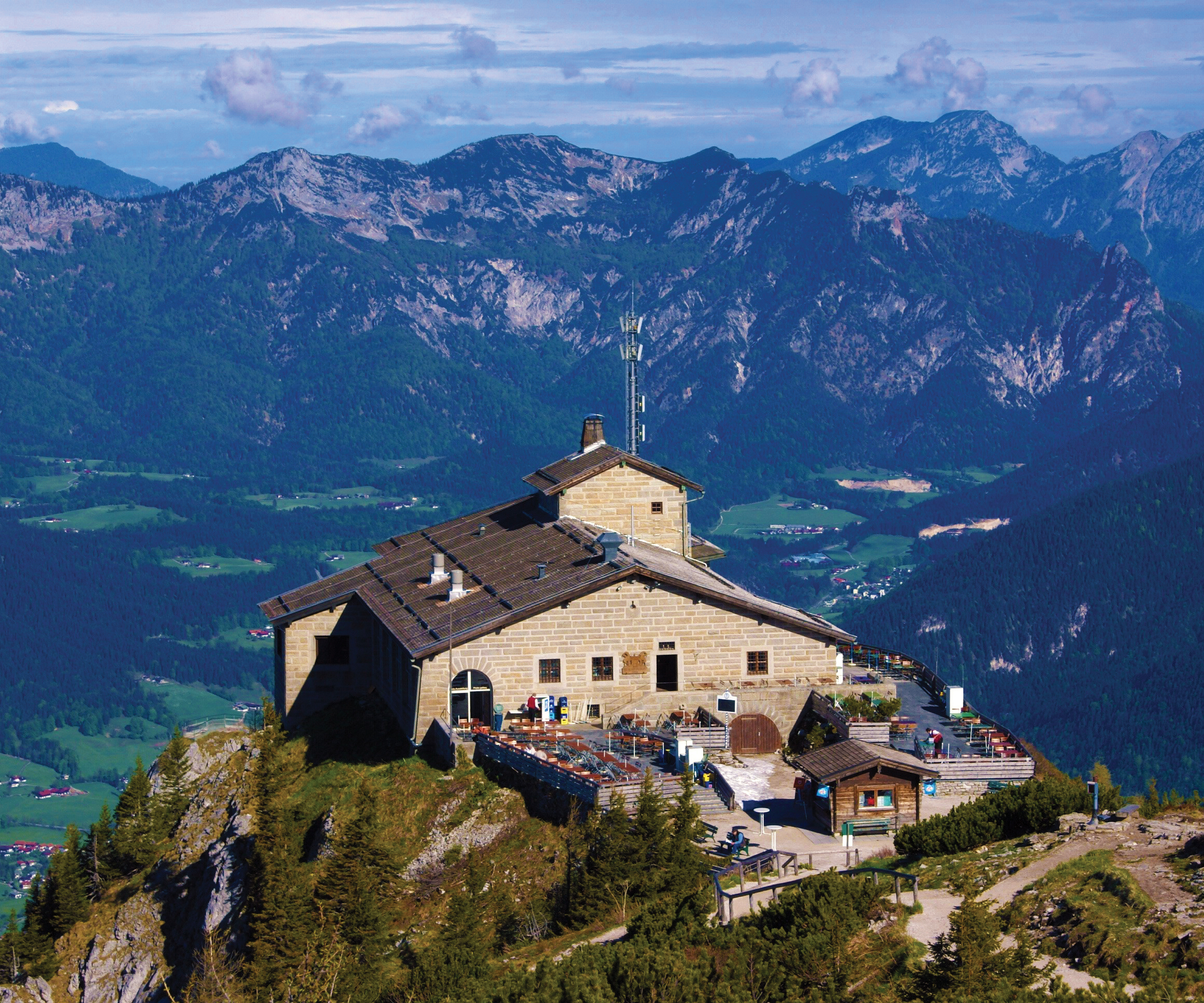 Begin with a stop in the German village of Berchtesgaden where you will take a bus and elevator up to the Eagle’s Nest, Hitler’s mountain hide-a-way. In the case of a halted bus operation, we will substitute a visit to the Obersalzburg Documentation Center. After an independent lunch, become acquainted with nearby Salzburg, famous for the 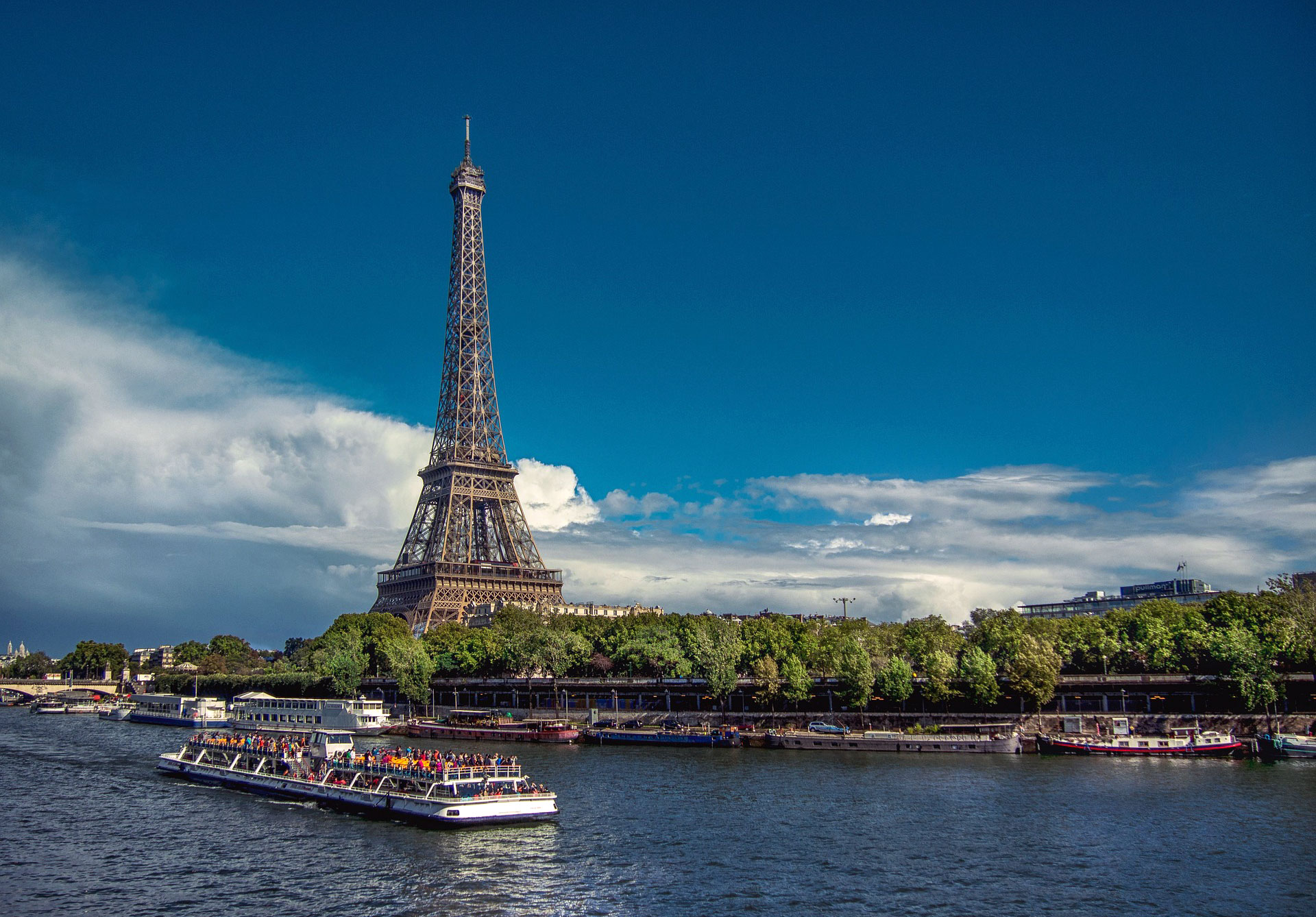 Glide along the Seine River by boat while viewing the Eiffel Tower, the Louvre, the Notre Dame Cathedral and several other famous sights in Paris. This excursion provides excellent photo opportunities.

Tour Hotel. Available after the WWII Memorial Tour of Europe. Do you need more time in the City of Lights? Image Tours can arrange additional nights at the final tour hotel in Paris.

Available after the WWII Memorial Tour of Europe. If you would like to add London, consider a 3-night post-tour extension including 1 additional night at the Paris tour hotel and 2 nights at a London hotel. The package includes a London Hop-on-Hop-off bus day pass (8:00 a.m. to 5:00 p.m.) and rail from Paris to London. 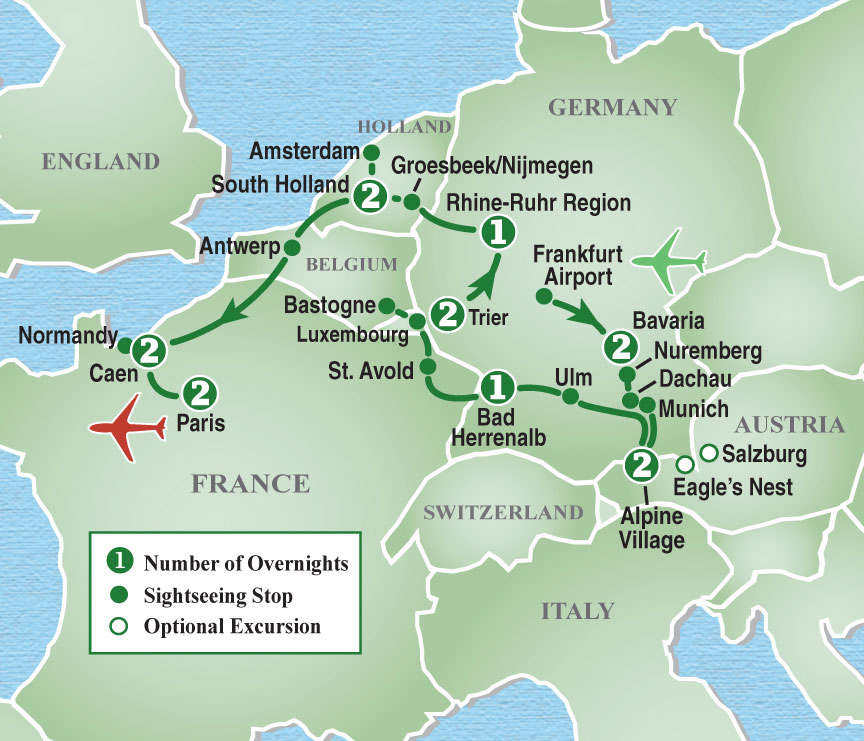